Return of the malls in Thailand | APAC Property Deals

Return of the malls in Thailand

The Bangkok retail market appears to be bucking a broader global trend, in which online shopping is threatening the survival of large shopping malls. After two years in which most of the new retail development in the capital consisted of smaller-scale community malls, big shopping centres are scheduled to make a comeback in 2018.

Supply: A total of 148,610 sq m of new retail space was added to the market during the first three quarters of 2017, with another 57,250 sq m scheduled to be completed in the last quarter of the year. Total retail supply in Bangkok and surrounding area as of Sept 30 was 7.69 million sq m. Approximately 60% of the new space added in the first three quarters of 2017 was shopping malls, followed by community malls at 21% and supporting retail at 15%.

The retail industry in many countries has been affected by online shopping and dramatic changes in consumer behaviour. Many large-scale hypermarkets or shopping malls in other countries have closed or are struggling to maintain traffic and sales at the high levels they once enjoyed.

But the retail business in Thailand appears to have been not affected as much as many other countries. Most operators and developers are still looking to expand branches or stores in high-potential locations around the country.

However, the addition of new retail supply is trending lower because of the negative effect of higher land prices. In addition, online shopping is disrupting the cash flow of traditional retail projects.

Most of the new retail projects that opened their doors in 2017 were shopping malls, followed by community malls, where growth was lower than in the previous year. Community malls, which have attracted dozens of eager new entrants over the past decade or so, are now seen as being on a declining trend.

All retail developers are concerned about how online and mobile shopping could keep a growing number of people out of bricks-and-mortar stores. It is a relatively new trend in Thailand, but most of the big-name retail developers and operators are developing their own mobile applications or platforms for supporting the trend, so that their online and offline businesses will complement each other.

Community malls for many years were the fastest growing category in the retail industry in Greater Bangkok, eventually moving into second place ahead of hypermarkets in terms of space occupied.

Community malls occupied only 300,000 sq m in 2007 and were ranked third, but new locations were opened in every quarter in succeeding years.

Conventional shopping malls still rank first in the market with about 58% of total retail space, and 486,000 sq m of mall space still in the pipeline and expected to be completed between 2018 and 2020.

The age of the mega-mall may be coming to an end, however. The main retail players are focusing more on smaller formats and categories that can be developed quickly and can be expanded easily to all areas around Thailand.

Demand: The average occupancy rate for retail space in all locations in the third quarter of 2017 was above 96%, slightly higher than in the previous year, even though consumer purchasing power has been weak in the past couple of years amid concern about the slowness of the economic recovery. And while overall economic conditions in the country are now trending positively, Thais are still concerned about the long-term situation and many prefer to spend less at the moment.

The Bangkok suburban area has the highest retail occupancy rate, with many hypermarkets and shopping malls almost fully occupied. However, some community malls are empty or cannot attract well-known brands.

Rental rates: The average rental rates of all locations in Bangkok and the surrounding areas in the third quarter of 2017 were little changed from the previous quarter. However, many international brands and shops are still more focused on increasing the number of stores, as they believe Thailand still has room to grow over the long term. Therefore, rental rates have continued to increase in recent years.

The downtown area has the highest rental rates, at more than 3,000 baht per sq m per month for some malls in prime locations or with direct access to BTS stations. The rents in the Bangkok suburban area start at 500 baht per sq m per month in some community malls. Retail rental rates in 2018 may remain similar to this year, depending on the evolving economic situation.

The QR revolution: One rapidly emerging trend that could help support shopping in physical stores is the convenience factor afforded by cashless payment. The emergence of QR codes for payment via mobile phone has revolutionised payment in China, where even some of the smallest of street-food vendors have now gone cashless.

The QR code is just the latest in a series of mobile advances that allow consumers to conduct financial transactions without ever going to a bank. Transactions through mobile applications in 2016 occurred for 20.8 million accounts, an increase from the previous year of 49.4%.

Many commercial banks in Thailand have now developed or are developing mobile applications to support financial transactions and payment by QR code.

In addition, commercial banks and the Bank of Thailand are trying to persuade all retail centres, supermarkets, convenience stores and street food stalls as well as all services to use QR codes for financial transactions, similar to China and some other countries. 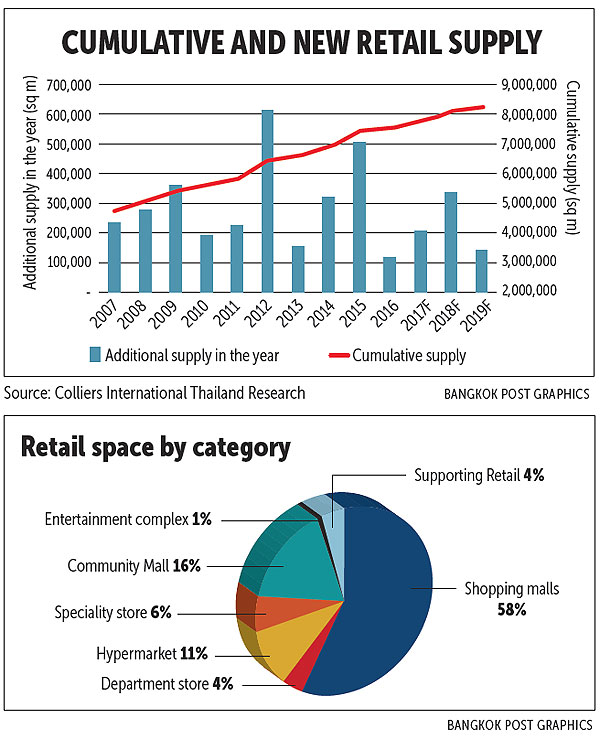 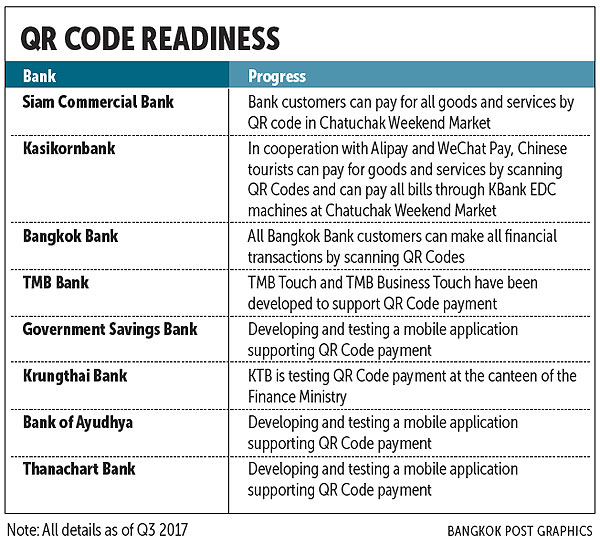 What you can read next

Betting against a bubble